"Pentalogies is a space of expression on the border between awakening and introspection. A place where I gather all that stimulates my sensitivity, where I vibrate my influences, my chimeras, my life course through sensorial metaphors. Developing infinitely the universes which are born from their awakening, the senses are at the same time the bottom and the form. As a counterpart, I like to go through my perceptions, to look for details, to change my point of observation, to grant myself a purely intellectual and infinite escape like a recursive representation... " - Dorothée Duret, founder and artistic director of the brand

Pentalogies takes on the senses as a subject of study and is like a prism that breaks down a theme to read it sense by sense and free the language of our five interpreters of the world. The senses drive the organs and converge towards our soul. Pentalogies Parfums is articulated in a collection of 5 fragrances named ÉTUDE. Each ÉTUDE deals with a single subject broken down and interpreted by each sense: Sight, Hearing, Touch, Taste and Smell. ÉTUDE 1 is an introduction to the concept. It focuses on the organ as an instrument at the service of the senses and defines a universe for each of them that has its own characteristics. The eye, the ear, the skin, the mouth and the nose constitute the first pentalogy and reveal their singular universe through a story, the incipit of a perfume. Thus the Eye, window on the soul with a thousand dimensions, is presented as the Cosmic Organ; the Ear and its aquatic curves, trainer of waves, is the Organ of the Abyss; the Skin, ultra-sensitive, erectile and electric envelope, is the Erotic Organ; the Mouth, drunken cavern, epicurean devourer, is the Mythical Organ, while the Nose, guardian of memory, is the Memonic Organ.

After a childhood in Africa, Dorothée started studying style in Paris. Then, she travels around Europe until 2013 as a visual merchandiser for fashion brands such as COS or Ralph Lauren. Passionate about art and driven by the intuition that olfaction will unite her interests, Dorothée begins her sensory quest "The sense of smell is the most receptive to art" she says. This is how Dorothée naturally created "Le Nez Insurgé" (2015), a niche perfumery in Bordeaux (France) that stands out for its sharp and confidential selection, its relaxed approach and its independence. In 2016, she joined the "perfume" selection committee of the Tranoï trade show in Paris and in July 2019, Dorothée launched her collection of perfumes that she designs around the language of the five senses, "Pentalogies". Dorothée is a purist who likes to challenge, surprise and decontaminate olfactory. Her creations will amaze you with their ambition! It is difficult to remain insensitive to these five senses. 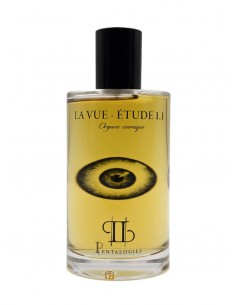 PNTLGSPE1.1
€180.00
PENTALOGIES PARFUMS Eau de Parfum 100ml The Eye: Organ of the Cosmos Etude 1.1 is engraved in a monochrome universe, a universe without contour. The accord is intense, pale, and mysterious, like a veil of stars. Suspended, it imposes its slow rhythm; we learn how to experience its different parts in order to comprehend its sillage. We love its aldehydic...

PNTLGSPE1.2
€180.00
PENTALOGIES PARFUMS Eau de Parfum 100ml The Ear: Organ of the Deep Etude 1.2 reveals an immeasurable chill trickling on pearlescent wood. A quest for harmony and precision and a purity born from the salty and opaline ripples. Its consistent rhythm and elegant delicacy envelope and reassure. 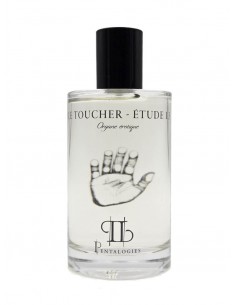 PNTLGSPE1.3
€180.00
PENTALOGIES PARFUMS Eau de Parfum 100ml The Skin: Organ of desire Etude 1.3 is venom, searing and electrifying, It’s flesh against flesh, a tactile and narcotic bolt of lightning. Penetrating and sensual. This solar heat invites touch and reveals the animality of desire. 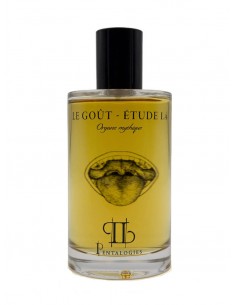 PNTLGSPE1.4
€180.00
PENTALOGIES PARFUMS Eau de Parfum 100ml The Mouth: Organ of Myth Etude 1.4 elucidates a baroque universe: velvets the color of warm honey, intense pigments of a luxurious jungle. Lulled by this salty-sweet indolence, we’re exposed to the hidden danger which strikes before we’re able to flee. This is the junction between desire and danger.

PNTLGSPE1.5
€180.00
PENTALOGIES PARFUMS Eau de Parfum 100ml The Nose: Organ of Memory Glistening hide, Etude 1.5 marries the reassuring aura of the morning’s coffee grounds with the indelible imprint of a roll of film. Towering Olympian, cold and immobile, its grandeur dwells in its incorruptible righteousness.